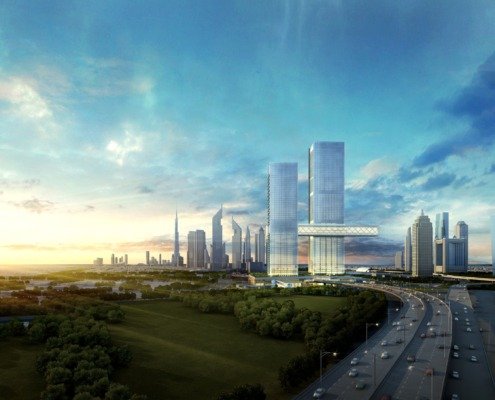 The $1 billion One Za’abeel project, will resemble a giant capital “H” rising above Dubai’s business district. The design features two podium-mounted skyscrapers of 300 and 235 meters respectively, joined by a 228-meter steel bridge that will constitute a tower in itself.

The bridge – dubbed “The Link” – will be the longest cantilever in the world. The 9,000-ton structure is being assembled 25 meters above ground, before being jacked into position at a height of around 100 meters and secured to the towers.

The audacious design has been rewarded with prizes such as the “Best Innovative Project of the Year” award at the Construction Innovation Awards and represents a step forward according to industry experts.

To ensure that the work of dozens of separate contractors was efficiently coordinated, lead engineers ALEC used 4D modeling to plan the build.