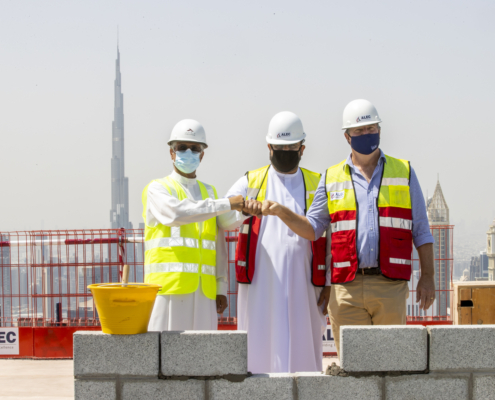 ALEC has topped out 67-storey Tower A of Ithra Dubai’s two-tower mega development One Za’abeel.

Standing at a height of 307 metres, Tower A has been fully connected to its neighbouring Tower B via a 225 metre, 8,500 tonnes sky bridge known as ‘The Link’, which was successfully installed over a two-week period in Q4 2020. Elevated at just over 100 metres about ground, ‘The Link’ is not only a unique design feature, but a feat of engineering that has placed One Za’abeel in the record books as the world’s longest occupied building cantilever.

In numbers, Tower A required 211,000m3 of concrete and 54,110 tonnes of steel reinforcement, the equivalent weight of just over 94 A-380 Airbuses. Featuring 69-stories, Tower A is twelve floors taller than its neighbouring Tower B and will soon to home to 16 office floors, 310 luxury hotel rooms, 89 ultra luxury hotel rooms, 96 serviced apartments and six dedicated floors for the Investment Corporation of Dubai’s new headquarters.

Commenting on the milestone, Kez Taylor, CEO of ALEC, said: “The topping out of Tower A is one more major accomplishment in a list of achievements that have made this project so unique. While there is still much to be done, the topping out of both towers and the successful installation of ‘The Link’ mean we are now in the home straight towards completing this extraordinary project.”

This incredible milestone comes only a few months after the top out of Tower B.